Treasures from the Hedgerow: Elderflower cordial

Happy summertime to you all!  I hope that you  have many wild and delicious things blooming in your lives in these long days of blue skies and sun.  I apologize for my lack of writing these last few weeks, but I hope you all will forgive me, for I have a pretty good excuse! My sweetheart of nine years and I had a beautiful wedding ceremony in our homeland of Northern Michigan, and then we spent two wonderful weeks meandering around rural England and Wales, exploring the ancient and sacred wonders to be found there. 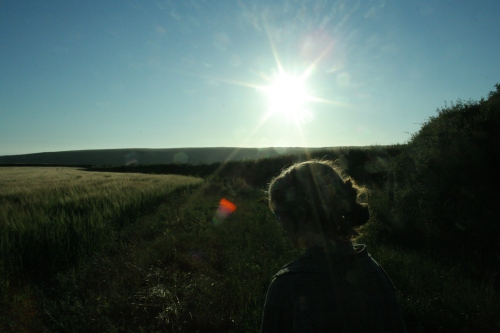 One thing we spent a good deal of time doing was walking along lanes lined with tall hedgerows. In case the concept of the hedgerow is new to you – the hedgerow is basically a living fence or border created by hedges (shrubs and small trees), used to shoulder roadsides in the British Isles, and to divide land and fields into parcels where livestock can be contained (giving the land that characteristic green patchwork look).   Many are ancient and began their growth many many generations before your or my birth ( some are 700 years or older and others date as far back as the Bronze age).

But the hedegrow is much more than a simple fence or road border. Over time, the shrubs and trees that we’re initially planted become intermingled with a cornucopia of native plant species, until the hedge develops into a diversified ecosystem of plants which becomes home for a variety of animal, bird and insect species. One estimate states that hedgerows in England house around 1500 insects, 65 birds,  20 mammalian species and over 600 species of flowering plants! John, the owner of Ty Mynydd farm that we stayed at on our travels, has been restoring old hedgerows on his property. “When we first came here,” he told us, “it was dead quiet. Not a bird call around. Now we’re surrounded by song all year long, the bee population is thriving. It really is amazing.”

While the hedgerow peaks a variety of interests depending on the person – ornithology, archeology, etymology –  for me it was of course the plants. For a person who loves gathering wild foods and collecting plants for medicine, the hedgerow is nothing short of heaven! All of my dearest and most well known plants, right there living together in one place!  Hawthorns, rowans, hazels, and willows; brambles and wild roses; valerian, meadowsweet, nettle, cleavers and St. Johnswort among others, and of course, the beautiful elder, one of my most favorite plants.

All throughout my journey, I saw the lacy blossoms of the elder shimmering white in the bright summer sun. Each of those lacy sprays is made of up the tiniest, most precious flowers that each look like little stars (perfect for scattering over a dessert of summer fruits with creme anglaise!). The elder has often been associated with the moon, and you can easily see why when you look closely at the flowers. They remind one of stardust and that beautiful white light that bathes the earth when the moon is full. Kate Gilday, herbalist and creator of woodland essence flower essences calls elder, “the essence of starlight”.

The flowers have a lovely floral scent in the morning, that can turn somewhat overly musky and foetid in the afternoon, which is just one manifestation of the magical duality of this plant. For the elder has always been considered on the realm of magical, a plant of contradictions – of lightness and darkness both. For though the lacy flowers of June give off an angelic appeal of delicacy, innocence and purity – gazing upward at the sky; the black berries formed in late summer are nothing other than witchy, drooped downwards and steeped in a sort of shadowy malevolence.  And while elder is the plant of choice for witches and evil spirits – the form taken by witches who wish to disguise themselves,  it was also planted to ward off evil spirits and witches! 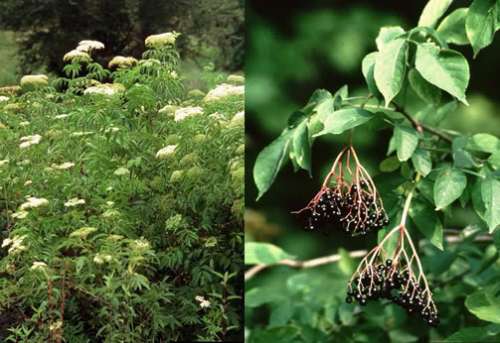 True to its dual nature, it seems that for every folk legend on how elder  invokes evil, death and curses, there is another suggesting its use to protect against evil and heal.  If one reads further into the mythology, this duality seems to take on a clearer light.  Elder was believed by many Northern European cultures to exist at that boundary between this world and the otherworld, where it was thought of as a guardian – a protector of the inhabitance of this world from the often malevolent intentions of those in the underworld. (This is why its said never to fall asleep beneath an elder – for you may see both magnificent and terrifying things!).  In other legends, the elder was considered as a personification of the great Goddess (known as Hyldemoer “elder mother” in Scandinavia, or Frau Holle “mistress elder” in Germany), giving medicine and protection  to her people in return for their respect and devotion.

In both beliefs, to injure the wood of the elder or cut it down was believed to invite disaster and even death upon the doer – whether seen as invoking the wrath of the Goddess, or releasing the dark energy of the underworld restrained by the elder. In either version, these legends seem to nod at the existence of elder as a hedgerow plant – a plant on the border separating the familiar from the unknown –  whether of one’s land from the wilderness of the outside world, the strange magic of the otherworld from the world we know, or the wildness and magic of the feminine from the logical nature of masculine.  And, as a border plant, elder takes on that border feel – dabbling some in this world in the next, being both familiar and wild, magical and mundane, and  full of moonlight and stars and June sunshine as I passed by it on my walks.

And along this very same theme, elder is a medicine and a food, but also somewhat poisonous. While the flowers and berries are perfectly edible, the leaves and stems are concentrated in cyanogenic glycosides, which when eaten in excess, can potentially cause cyanide toxicity. They also have a purgative effect due to the alkaloid sambucine. However, prepared as a salve or medicated oil, the leaves make an excellent remedy for sprains and bruises.The berries and flowers have negligible amounts of the cyanogenic glycosides and do not cause any concern – they are safe even in pregnancy and for small children.

Along similar lines, elder is delicious when prepared and picked correctly, but can be horrible otherwise! The flowers, as I’ve stated above, can go from a delicate floral aroma to an unpleasant mustiness depending on the time of day and age of the flower. It’s best to pick in the morning, and favor young blossoms that don’t lose too many flowers when you shake the heads. Leave the older ones to go to berry. The berries are not so tasty raw – somewhat bitter and acrid tasting, but mellow into a delightfully characteristic flavor when cooked – slightly musky and thick – like a strange and secret grape.

Medicinally, I could go on for pages about elder! Everyone knows that elder berry syrup is a wonderful remedy for cold and flu season – having strong anti-viral properties (particularly against the influenza virus), containing high amounts of vitamin C and anti-inflammatory bioflavanoids, stimulating immune function and promoting diaphoresis (sweating) to bring down fevers and cool the body.  Studies have confirmed that elderberry extract can significantly reduce the severity and length of influenza infections.

Elder flowers are a wonderful decongestant, perfect for colds but also for allergies and sinus congestion. I tend to include both flowers and berries in nearly any remedy I make for the colds or flus. They also possess the diaphoretic effects of the berries, and have been used to this effect as a blood cleanser for eczema and skin rashes by opening the periphery and normalizing sweat gland activity, as well as promoting elimination through the kidneys.

But medicine aside, elder is such a fun plant to play with in the kitchen! At a bed and breakfast we stayed at in Devon, we we’re offered the most delicious elderflower cordial made by Jennifer, our host. We sat in the garden overlooking Welcombe Mouth bay, and sipped cordial mixed with bubbly spring water and garnished with a sprig of mint and a slice of lemon, watching the sun go down and the light turn a beautiful twinkly lavender while the resident chickens clucked at our feet. What a wonderful evening that was…

Well, as soon as I arrived home, I crossed my fingers that I hadn’t missed the elder blooms of Vermont. I went venturing out to my favorite elder spot (which is top secret, mind you!), and there they we’re! Beautiful and sparkling white, like finely crocheted lace. I filled up my basket and raced home to try my own hand at making elderflower cordial, and I am quite delighted with the results. Here is the recipe I followed: 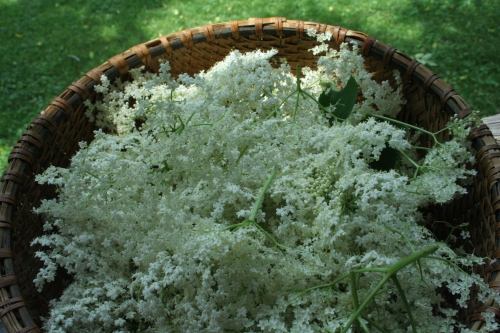 Combine the sugar and water in a saucepan and bring to a boil, stirring frequently until all the sugar dissolves. While  you wait for the sugar to dissolve, strip the zest off the lemons and orange using a vegetable peeler or paring knife into wide strips, avoiding the white pithy part which has a bitter flavor. Once the zest is removed, slice the lemons and oranges into thin segments. Combine the lemons and orange, the zest and the elderflowers into a large bowl, and then pour the prepared sugar-water syrup over everything. Cover the bowl with a towel and leave at room temperature for 24 hours.  The next day, strain everything through a large colander lined with cheesecloth and bottle in sterilized glass bottles. (Note: Better to use several smaller bottles so you can use them up quickly once opened). Store in the fridge, or freezer. 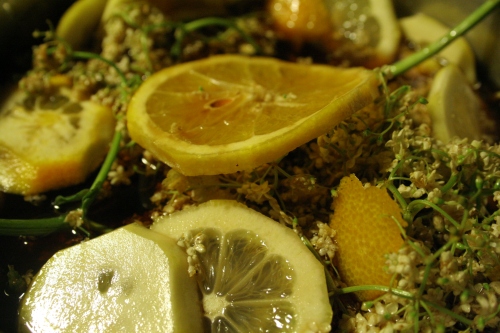 Now, how to use your cordial:

4 Comments to “Treasures from the Hedgerow: Elderflower cordial”