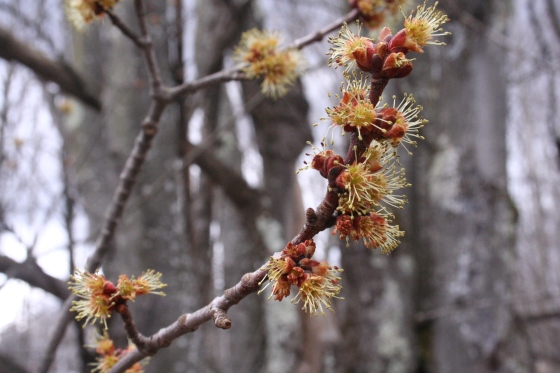 I’m not able to write you much today, but I wanted to say hello.  The past week has been a bit of a whirlwind for me, and I haven’t had the time or energy to put together something formal – but sometimes it seems like hello is enough. Hello and how are you. There is so much that can be held in these simple words.

Last week, I received some very difficult news that brought me home to be with my family for a short time. I can’t say much more than that, at least for now, because it is not my story to tell. But I can tell you about the rare beauty of moments – moments that make you forget the thing which is always on your mind – and remember the world around you. I’ll tell you about the way that walking in the woods and sitting down on mossy logs and watching the leaves budding out on the trees a little more each day can maintain your sanity. I’ll tell you how it does really help when a person you haven’t seen for years touches you on the shoulder and asks how things are – and how I will never hesitate now, to do the same for others. And I’ll tell you how nice it is, that even though the cause is not a happy one, that I can see my entire family in the same room, which is a site I haven’t seen for longer than I can remember. And the moments of laughter, when things can feel normal even though they are not, those moments are nice too.

And most of all, I’ll tell you how powerful a thing that hope is, how it springs forth from somewhere you didn’t know you kept it, and it carries you along on it’s wings – and it seems to me like every sign of spring that I see is a sign of hope – a reaffirmation about the powerful resilience of life. Even though it is cold today, and I am watching a fine snow come down like fairy dust – I see the green buds of the trees, I see the pastels of spring flowers and the bright cheery yellow of forsythia. This is exactly what hope is like, this scene.

Until I get back to Vermont and life as usual, I thought I’d send you a link to an interview I did over at The Art of Seeing Things. Shari was kind enough to ask me to be a part of her interview series, and I felt incredibly honored to do so. While you’re there, you might also take a peak at her Spring Manifesto Series – there is so much goodness to be discovered in those posts.

Anyhow, I hope you’ll enjoy the interview, and I’ll be back soon with some photos of the first edible spring treasures I’ve been finding, and perhaps a recipe or two. 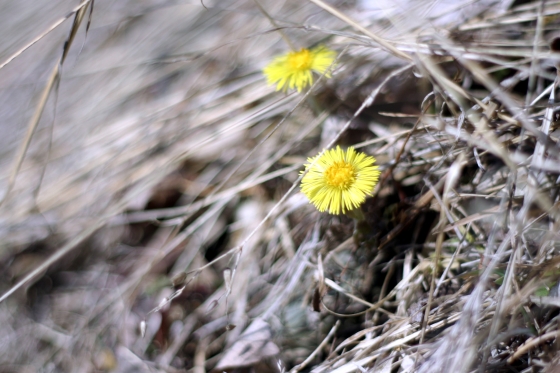 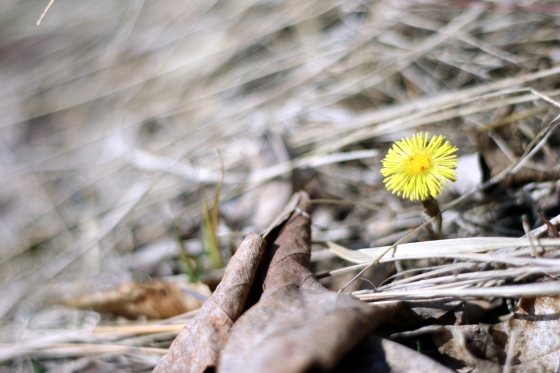 The very first flowers of spring. Ah, is this not happiness? 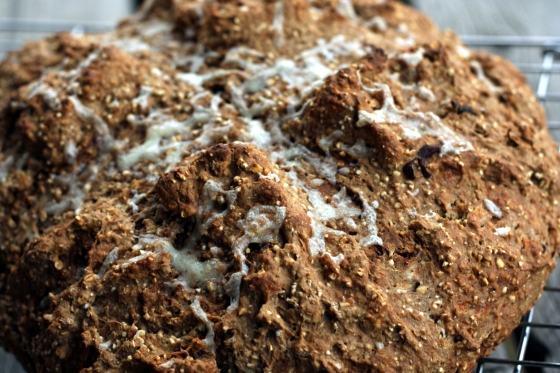 Many years ago now, I was sitting in the front seat of a bus winding its way down the coast of County Clare. It was a September afternoon with that soft spitting mist and curtains of fog which seem such a part of the landscape there – a soft day I think they would call it. I was 19 and it was my first time coming to Ireland. In my pocket was a gold pocket watch, the name Birdie Montgomery etched into the cover, the name of my Great Grandmother.  I gazed out of the window, the mist running down it in fine rivulets, imagining what it would be to call this mystical island home. Tiny stone cottages sped past, behind them a patchwork of green fields dotted here and there with sheep and cattle. Glimpses of the ocean came now and then as the bus rounded corners and the fog occasionally thinned. What did she think of when she gazed out into the drizzle and the mist? Why did she leave it?

The bus driver was humming softly along with the radio, occasionally bursting out into full song. He was listening to American country, which has that sort of disorienting effect of finding something familiar in an unfamiliar place. If I said you had a beautiful body, would you hold it against me? He was a burly man, a long grizzly beard, a round bulging belly and that Irish sort of twinkle in his eye. He looked like he could’ve been a fisherman. Us being the only ones on the bus, he would occasionally turn round in his seat (rather disconcerting, mind you, on an almost one lane road with hair-pin turns) and look us over.  Where are you off to then? he asked on his third or fourth inspection. We told him we we’re on our way to the Cliffs of Moher. He nodded. Fierce fog on today he said. In fact, he went on,  it must be the foggiest day at the Cliffs that I can remember. Indeed it is. He jerked his attention back to the road as he narrowly missed colliding with a bus coming from the other direction. 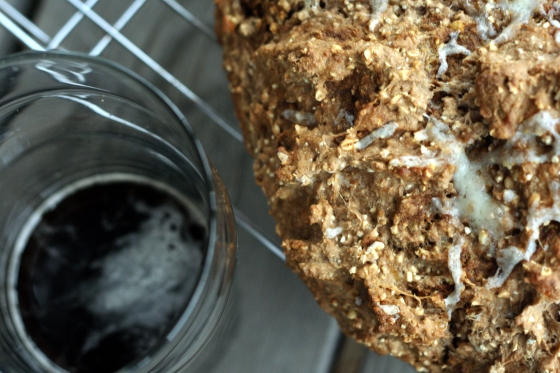 He went back to his humming for a bit, then he turned round again and gave us each a good hard stare. After what seemed like minutes of this, he said, apparently deciding we were worthy of his confiding,  I was attacked by the bees. We gave each other a nervous glance. Wasn’t it just our luck to end up on the bus with the psychotic driver. He was probably one of those who harbored a deep-seated hatred for American tourists, and planned to push us of the cliffs when we got there. No one would see him do it what with the fog. But just as I was devising ways to pry the window open and what might be the best technique for leaping from a moving vehicle, he held up his bandaged hand in explanation.  Chopping wood, don’t you know. There was a, there was a – a nest! A nest hidden right there in the pile. Never saw it till they were upon me. I was running round my yard like a devil with a poker up his arse. The neighbors thought I was off my nut for sure this time! He paused as he navigated his way round a sharp corner. Ever been stung yourself?

M told him of the time he stepped on a nest, I shared my story of the bee who flew up my tennis shorts and stung me right on the ass. He hooted with laughter – a sort of whoooo hooo hooo hoo that shook his round belly and made him slap his knee. It was a lovely sound, that laugh. A real true and hearty laugh. My hand swelled up to nearly 4 times its normal size he said, holding up the bandaged appendage. You wouldn’t believe it.  Now that we had swapped bee stories, he seemed to think we were alright. We chatted for the remainder of the ride, him asking us about life in America – particularly about poisonous snakes, and if we ever saw any – and us asking him about his life. He told us how he loved taking people to a place that he knew would change them forever, how they would get on the bus one way and get off another. Transformed by the power of the cliffs, don’t ya know. He only turned around and examined us occasionally after that. I like to think he liked us.

It was indeed foggy at the Cliffs, and we couldn’t see  much of anything. We peered over the sides and far below one could make out the white caps of the waves crashing into the rocks some great distance below. The fog swirled round us in ribbons and though it wasn’t palpably raining, the air itself was wet. No where in sight were there power lines, billboards, aluminum sided houses, any of it. It was as though we had wondered thousands of years into the past, where only the fog and the crashing of the waves shaped the landscape, and not the hand of man. 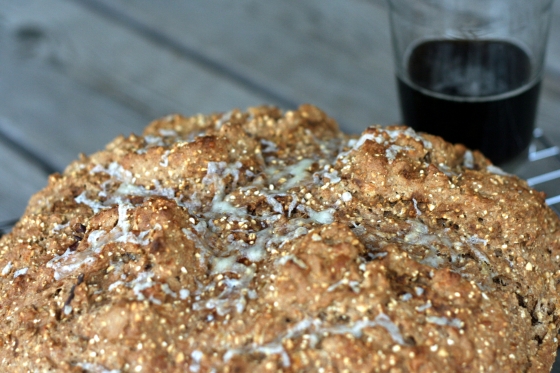 After we had finished with our exploring, we sat upon a grassy knoll overlooking the fog concealed cliffs, and we ate our dinner while we waited for the bus to come back – hunks of soda bread, apples, a wedge of cheddar, a Guinness. It’s one of those very simple sorts of meals you eat when you travel, the kind of thing that fits easily into a bag for lugging up mountain sides or walking for miles in search of a bus stop. But its one of those meals that really can’t be improved upon either (well maybe a salad or bit of warm soup would be nice) because it is perfect for the moment that you eat it in. It is made for that moment. And every time you eat it from then on, the memory of that moment will be there too – drizzle, mist, crashing waves and green that is greener than you ever imagined green could be.

Finally the bus came into view out of the wall of mist, and we hobbled on. Foggiest day on record he said, giving us a sort of pitying smile. But I see it has transformed you all the same.

This soda bread encompasses all of the ingredients of that day into one hearty loaf, laced with whole barley that is soaked overnight in buttermilk to enhance the digestibility. I make something like it every St. Patrick’s day, a day which seems fitting to remember the stories (and aren’t there always stories when it comes to Ireland?) from our travels there, and to think of Birdie, who I never knew, yet whose blood flows through my veins and imparts her sense of belonging to that great green Isle. 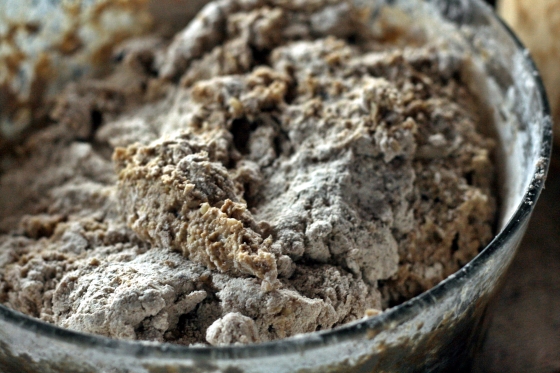 Place the barley in a bowl with the buttermilk and let sit overnight, or at least 8 hours.

Preheat the oven to 425 degrees F. Place the barley and buttermilk mixture in a blender or food processor with the Guinness. Blend until the barley is pretty well pulverized.

Place the barley mixture into a bowl with the remaining ingredients, stirring until the just come together. Pour the dough onto a lightly floured surface and knead briefly until it comes together into a wet sticky ball.

Transfer the ball of dough to a parchment lined baking tray. Using a sharp serrated knife, cut a cross through the dough, cutting about halfway through the loaf.

Place in the oven for 15 minutes, then lower the heat to 375 degrees F and continue to bake for another 30-35 minutes, or until the bottom sounds hollow when tapped and/or a knife inserted into the middle comes out fairly clean. At this point, but the remaining two tablespoons of cheese over the top, and place in the oven for a further 5 minutes until the cheese has melted.

Let cool slightly, and then serve, still warm, with butter. 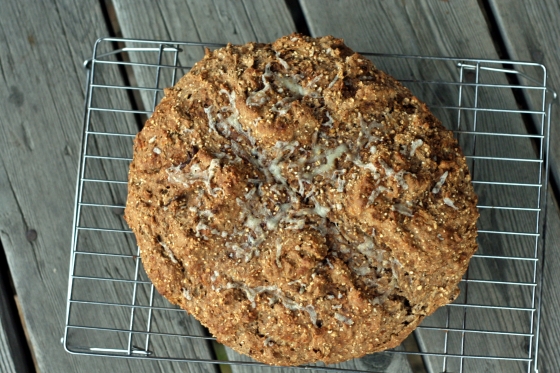